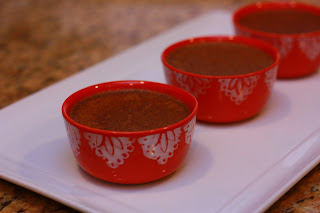 Tomorrow is Thanksgiving--are you ready?! The husband and I are hosting Thanksgiving for the second time this year and I've been planning the menu since about September. My original menu had about 3 sides and 15 desserts, but I've since changed it up a bit and reduced the amount of desserts to just three. Believe me, I'd much rather eat dessert for dinner than "real" food, but I know I'm kind of alone on this one, and since I shouldn't be eating too many sweets, I figured I shouldn't create a bunch of leftover treats either. Boo.

Even though I plan to indulge on Thanksgiving, I do want to have a "less guilt" dessert option, so I don't completely jump off the South Beach train. These pumpkin custards are a nice option for people following South Beach or who are just watching their sugar intake. I tweaked the recipe a bit to include more spices, as the original only called for a little nutmeg and cinnamon; I like my pumpkin to have a bolder flavor. 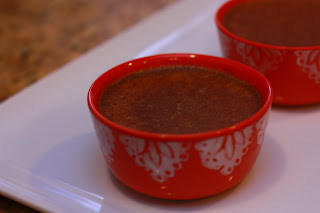 Directions
Preheat your oven to 325 degrees. Line a roasting pan with a kitchen towel to prevent the custard cups from sliding around. Bring a large pot of water to boil.

In a large bowl, whisk together the eggs, egg whites, sugar and agave until smooth. Add the pumpkin puree, cinnamon, nutmeg, ginger, cloves, all spice, salt, and vanilla. Whisk until blended; whisk in the milk.

Pour the mixture into six 6 ounce (3/4 cup) ramekins. Set the custard cups on top of the towel in the pan and slowly pour the boiling water into the pan, until it reaches about halfway up the sides of the cups.

Refrigerate for at least an hour, or until completely cooled. Serve with whipped cream if desired,
Posted by Janet at 8:00 AM

a friend shared a pumpkin custard recipe that I loved (but lost in a computer issue)... this is similar! Have been looking for awhile! thanks!