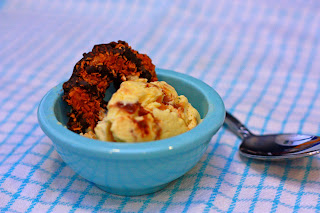 My favorite Girl Scout cookies are Tag-a-logs and Samoas; so much so that when I bought a box on my way into the grocery store during this year's Girl Scout Cookie season, it was half-eaten as I walked back out of the store. hehehe My friend's daughter is a Daisy this year, so I bought several boxes of cookies from her, and as I was eating a handful of Samoas one day, I thought about the Thin Mint ice cream I've seen in stores in the past.

"These cookies would make some amazing ice cream!" I thought to myself, pulling The Perfect Scoop off the counter. I thumbed through the tome, looking for inspiration for the base, already planning to mix in hot fudge, caramel and cookie pieces. David Lebovitz's Toasted Coconut ice cream jumped out as the perfect foundation for the ice cream, providing a creamy, coconuty flavor, that is key to the Samoa taste.

As the ice cream churned, I flipped to Dave's recipe for caramel sauce, which was super easy to make and didn't involve any corn syrup, which I saw in other recipes online. I used my own hot fudge technique and chopped up some cookies; as soon as the ice cream was done churning, I added my mix-ins and anxiously awaited the completion of the hard freeze. Oh the finished product! SO good and a perfect recreation of my favorite Girl Scout cookie. :)

David Lebovtiz's ice cream calls for a vanilla bean, which I can never seem to find in any stores around here, so I used additional vanilla extract in its place. I'm sure the actual bean produces a much richer flavor if you can find one, but don't stress if they are as elusive for you as they are for me.

Oh and one last note; if you don't have any leftover Samoas (I don't blame you, we ate 3 boxes in about two weeks here!) Keebler's Coconut Dream cookies are almost a dead-on replica. The only difference between the two is the cookie base; the Girl Scout cookie base is more crisp than it's doppelganger.

Pre-heat the oven to 350 degrees. Spread the dried coconut on a baking sheet and back for 5 to 8 minutes, stirring frequently so it toasts evenly. Remove from the oven when it is golden brown and fragrant.

In a medium saucepan, warm the milk, 1 cup of the heavy cream, sugar, salt, and the toasted coconut. Use a paring knife and scrape all of the vanilla seeds into the warm milk, adding the pod as well. (I just poured in about 3/4 of teaspoon vanilla extract at this point.)

Cover the pan, remove from the heat, and let steep at room temperature for one hour.

Pour the remaining one cup heavy cream into a large bowl and set the mesh strainer on top.

In the medium bowl (used when straining the liquid from the coconut), whisk together the egg yolks. Slowly pour the warm coconut-infused mixture into the yolks, whisking constantly. Scrape the mixture back into the saucepan.

Stir the mixture over medium heat with a spatula, constantly scraping the bottom as your stir, until the mixture thickens and coats the spatula. Pour this mixture through the mesh strainer, into the heavy cream. Mix in the 1/2 teaspoon vanilla extract and stir until cool over and ice bath.

Cover the bowl and chill in the refrigerator over night. Churn in your ice cream maker, according to manufacturer directions.

Once ice cream has finished churning, transfer half of the soft ice cream to a freezer-safe container. Stir in half of the chopped cookies, and fold in 1/4 of the caramel sauce and half of the hot fudge. Layer the remaining ice cream on top and repeat.

In a deep, large, heavy-duty saucepan, spread the sugar in an even letter. Cook the sugar over low to medium heat, watching it carefully. When it begins to liquefy, use a heatproof spatula to very gently stir it to encourage even melting.

Gently stir until all of the sugar is melted and the caramel turns a deep amber color. (Note: According to The Perfect Scoop, it will smoke at this point. This did not happen to me, but don't be alarm if it does for you!)

Immediately remove from the heat and whisk in half of the cream, which will steam and bubble furiously. Carefully stir until the sugar is dissolved, then gradually whisk in the remaining cream, as well as the vanilla and salt.

Any sauce that you don't use for the Samoa ice cream can be refrigerated for two weeks. Simply rewarm for a few seconds in the microwave and stir before using.

Pour the milk and chocolate chips into a microwave-safe bowl. The more milk you use, the thinner the sauce will be. I like to use about a 1/2 milk to 1 part chocolate chip ratio.

Heat in the microwave in 20 second increments, stirring after each 20 seconds, until the chocolate is completely melted.
Posted by Janet at 7:44 PM

I'm drooling!!! Those are my favorite girl scout cookies as well, even though in my part of the country we call them Caramel Delights!

I LOVE Samoas and planned to make some this year but have ate all mine, I will have to get another box before they stop selling.

Please update your blog. I miss reading it.