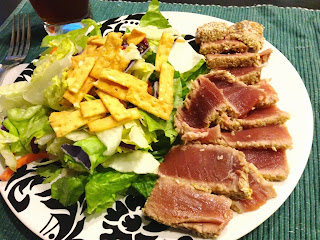 Now that I am no longer pregnant, I have been venturing back into eating sushi again. But, I think pregnancy whacked out my taste buds because sushi hasn't tasted as good as it did pre-pregnancy. I really want to enjoy my beloved raw fish once again, so I decided seared ahi would be a good re-introduction.

In pursuit of this goal, the husband and I recently had the seared ahi appetizer and the ahi crunchy salad at the Yardhouse, and man it was so good I wanted to order another round. We kept talking about recreating the appetizer at home, so when we found ourselves at Whole Foods (aka Whole Paycheck!) near Huntington Beach, we picked up an ahi steak and set out looking for a sauce recipe to replicate the Yardhouse's appetizer. I didn't find any recipes claiming to mimic the Yardhouse, but with some minor adjustments, a P.F. Chang copycat recipe came pretty close.

Directions
Combine all sauce ingredients in a small bowl and whisk to combine. Set aside.

Pat the tuna steak dry. Pour the sesame seeds onto a plate and press the tuna onto them. Flip the tuna over and coat the other side. Repeat with the edges.

To cook the tuna, pour just enough oil to coat the bottom of a pan and the heat over medium high heat. Once the oil is shimmering and hot, place the tuna in the pan and cook for 30 seconds. Flip over and cook the other side for 30 seconds. Using tongs, sear the outside edges for about 10-15 seconds.

Remove the tuna from the pan and place on a cutting board. Slice into thin pieces and serve with the sauce.