A Fresh Take on Pasta 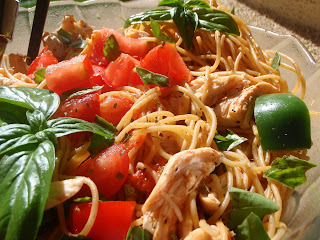 I really wanted to make the Szechaun noodles from Annie's Eats the other day, but as I read through the ingredient list, I realized I was missing at least 7 ingredients. Combine that with my husband's distaste for peanut butter (a prominent flavor in the dish), I decided to save that for some other time. But I was craving some kind of noodle dish, so I started pawing through my pantry to see what I could come up with. Here is my creation, with a bit of inspiration off the side of the pasta box. :)

This is great hot or cold. We ate all of it right away! This is another recipe to be added to the "rotation", according to my husband. Feel free to substitute the veggies for your own personal tastes or whatever is in your kitchen/garden. You can also omit the chicken for a vegetarian dish.

Garden Pasta
2 chicken breasts
3 tomatos, chopped
2-3 garlic cloves, diced
1 bell pepper, chopped
fresh basil, about 7 leaves torn
1-2 teaspoons dried oregano (you can use fresh too)
2-3 teaspoons pepper
1 1/2 tablespoons extra virgin olive oil
thin spaghetti (I just eyeball it and use however much I think we'll eat. I like to use the Barilla Plus, but you can use whole wheat or regular pasta too.)
2 cans vegetable broth (I only had one can, so I added about 6 ounces of water to the broth. Worked just fine)

Directions:
Bring the vegetable broth to a boil. Add the chicken to the boiling broth and cover. Boil until cooked through.

Once the chicken is cooked, remove it and place on a plate or bowl. SAVE the broth!!! Shred the chicken and set aside.

Bring the broth to a boil again and add the pasta. Cook about 7-8 minutes. (Since I only used one can of broth, my pasta absorbed all the broth, and the rest evaporated, leaving no liquid in the pan at the end. Watch your pan to make sure the pasta doesn't burn if this happens to you. Mine was totally fine.)
Cooking the chicken and pasta in broth imbibes more flavor into the two ingredients, resulting in a tastier dish than if just cooked in water. You can use chicken broth instead, if you'd like. Using the same broth to cook the chicken and pasta, gives another layer of flavor to the pasta as well.

While the pasta is cooking, heat 1 1/2 tablespoons olive oil in a sauce pan. Saute the garlic until golden and fragrant. Add the tomatos and saute for about two minutes. Set aside.

Once pasta is cooked and drained, combine in a large bowl with the shredded chicken, sauted tomatos and garlic. Toss to coat the pasta and chicken with olive oil. Add in the diced bell pepper, torn basil leaves, oregano, and pepper. Toss once more and serve. 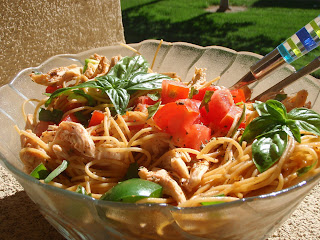 Note: I am trying to limit my sodium intake, so there is no salt in this recipe. Feel free to add salt to your taste. This would also be great with some parmesean cheese sprinkled on the top.
Posted by Janet at 12:49 PM

What a great salad! I love those flavor combinations! And so colorful!