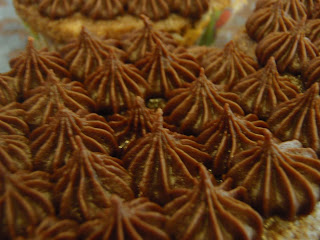 I also used to enter various county fair contests as a kid, and won awards for my fudge, a pair of shorts, and some other creations. I have a bag full of old, bug-chewed ribbons, rotting in my garage, along with all my old swimming ribbons, to prove this. But after about middle school, I lost interest and stopped entering contests.

This year I decided to stage a comeback and enter the cupcake baking contest, competing against my (award-winning) mother. A war of words was staged on Facebook (yes, my mom is my Facebook friend), and for weeks we tried to figure out what the other was making, though neither of us were willing to give up our secrets. Saturday, September 12th we both showed up at the fair, ready to take the other down.

We plated and turned in our cupcakes, and then with an hour to kill before judging began, we set off to eat some lunch. My kind mother knows I am beyond broke (being a teacher, I don't receive a pay check again until October. Please don't lecture me on saving...we did, but then we decided to buy a new kitchen table. Don't lecture me on spending within my means either. I know all about that, thank you), so she bought me a tasty Pink's chili cheese dog with mustard and a Diet Coke. It was too hot and I was too hungry to remember to take a picture. But if you've seen one chili cheese dog, you've seen 'em all. However, this was mom's first taste of Pink's, which is an LA institution (I used to work down the street from the original LA location and have eaten there...once). I did nearly throttle her when we walked from food stand to food stand while she tried to decide what she wanted to eat; me, I was starving, and would have eaten cardboard at that point. But since she was paying, I politely followed along and tried to help her decided. I must agree though, that the prices are exorbiant these days!

We then wandered around, looking at the gardens before heading back to watch the cupcake judging. My mom talked and talked while we covertly watched them judge her cupcakes, all the while shushing me so she could read the judges' lips (ummm, that was you talking, mom, not me). Then they began judging mine; I could tell the judges weren't in love. So I did what any rational person would do; walked away in tears, sobbing that I am a loser. Yeah, I am a bit overdramatic at times. Shoot me. 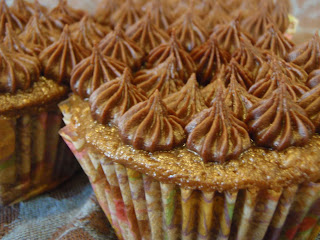 Finally the judging was over and it was time to announce the winners.
3rd place: not us
2nd place: not us
1st place: Pina Colada Cupcakes with Coconut Cream Cheese Frosting...and not us

Neither my mom nor I won. I will be selfish....I would have been very upset if my mom won 1st, 2nd, or 3rd, and I won nothing. But I am a brat. We did ask the nicer of the 6 judges (there was one seemingly snotty judge that I wanted nothing to do with) for a critique.

Mom's apricot cupcakes: "The filling is too tart."

My chocolate banana cupcakes: "They have too much liquid and are slightly underbaked. Make sure your cupcakes have a nice domed top on them."

I knew they had too much liquid, but as I made these, oh, 2 hours before the contest, I did not have time to fix. Also, my bananas weren't ripe enough, so the banana flavor was off. I did make a test batch a few weeks ago, which my co-workers inhaled, and I know were 10 times better, 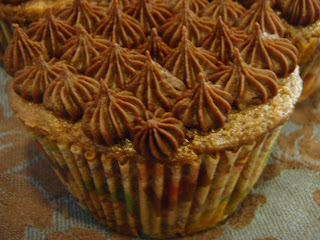 but it all comes down to game day. The judges also told me chocolate banana is too common a flavor; they want something unique that really stands out. Next year I will be making boozy cupcakes...

In an electric mixer on medium high, cream together the butter and sugar until fluffy. Add the eggs one at a time, beating until each egg is incorporated. Scrap down the sides of the bowl as needed.

Divide batter evenly among prepared cupcake tins and bake for 25 minutes, or until a tester comes out clean.

Once the cupcakes have completely cooled, fill a pastry bag, fitted with a large round or star tip, with the pastry cream (recipe below). Push the tip into the center of the cupcake and squeeze to fill.

Fill another pastry bag, fitted with a small star tip, with the chocolate banana frosting (recipe below) and pipe frosting onto each cupcake.

Directions:
Pour the half and half, 6 tablespoons sugar, and the salt into a large saucepan. Heat over medium heat, stirring occasionally, to dissolve the sugar.

Meanwhile, whisk the egg yolks in a large bowl. Add in the remaining sugar and whisk until combined, about 15 seconds. Whisk in the cornstarch until combined and the mixture is pale yellow and thick.

Place a layer of plastic wrap directly on the surface of the pastry cream and refrigerate over night.

Directions
Melt the butter and stir in the cocoa. Alternately add powdered sugar and milk, beating to spreading consistency. Stir in the banana extract.
Posted by Janet at 7:27 PM

Email ThisBlogThis!Share to TwitterShare to FacebookShare to Pinterest
Labels: dessert

In my opinion, you are the best baker!