Chicken and Mushroms in a White Wine Sauce 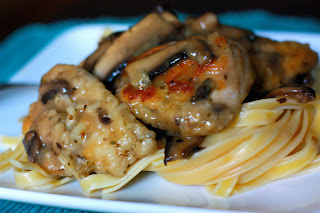 Summer break is a great perk of teaching. After waking up at 6am all school year, I relish sleeping in until 9am every morning. Even then, I set my alarm or I'd easily sleep much much later.

Once I finally do roll out of bed, I usually settle into the couch with my laptop and check out my favorite websites, one of which is Annie's Eats. She always has such beautiful pictures, so even if I'm not too interested in the recipe I love seeing her photography.

I haven't blogged too much this summer, mainly because the husband and I have been eating a lot of stuff that I've made several times before. I feel like we often find a new dish we love, but then never eat it again because I want to make something new to feature on my blog. But then a few days ago, Annie's Eats posted a recipe for Chicken and Artichokes in White Whine Sauce, served over rice, that looked especially good. A quick browse through the recipe and I saw I had nearly all of the ingredients, except for the artichokes, and that it wouldn't take too long to make, so I quickly decided to cook it for dinner that night.

I didn't want to run out to the store, so I just omitted the artichokes, and I used two large portabella mushrooms, rather than the baby bellas the original recipe called for. I also doubled the sauce ingredients, as I planned to serve the chicken over fettucini instead of rice. And my last change was using 5 or 6 boneless chicken thighs in place of the breasts; that was an unintentional change (I thought I grabbed breasts from the freezer), but the results were great.

I loved this dish, though the husband thought it was just ok. He felt like the wine flavor was too pronounced, but I disagree. I felt like it was a good balance of flavors, though I did add a sprinkle more salt at the table.
Chicken and Mushrooms in a White Wine Sauce

Directions
Bring a large stockpot of water to boil on the stove. Once the water comes to a boil, add the fettucini noodles and cook until they are al dente, about 12-13 minutes.

In a pie plate or shallow dish, combine the flour, herbs de provence, salt and pepper and stir with a fork to blend. Reserve 2 tablespoons of the flour mixture.

Coat the chicken thighs in the flour, shaking off the excess.

Heat the olive oil in a skillet over medium-high heat. Add the chicken to the pan and cook until golden brown and cooked through, about 8-10 minutes, turning halfway through cooking. Remove the chicken to a plate; cover and keep warm.

In a liquid measuring cup, combine the white wine, chicken broth, and reserved tablespoons of flour; whisk until smooth. Add the mixture to the skillet, cooking until it is warm and slightly thickened.

Return the chicken to the pan to warm through and cover with sauce. Serve the chicken over fettucini with sauce spooned over the top, and garnish with grated Parmesan as desired.