These pancakes are bananas! B-A-N-A-N-A-S! 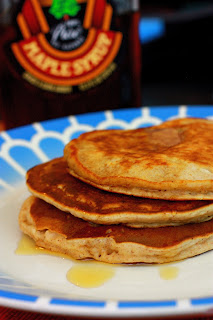 Pancakes are the perfect weekend breakfast. Anytime the husband and I indulge in a stack of Sunday morning pancakes, it reminds me of the times my parents would surprise me with a weekend breakfast of banana pancakes. Though I usually ate mine hours after everyone else since I always slept in as late as I possibly could (I had to make up for all those days of early morning swim practice before school!).
Usually when the husband and I want pancakes, we just hop in the car and head to IHOP, but add in two side orders of hash browns, maybe a side of bisquits and gravy (with the gravy...on the side), and two beverages, and you've got a pretty pricey weekend breakfast. I don't know about you, but if I am going to drop $30 bucks on breakfast, I don't want to spend it at IHOP!
I've made homemade pancakes before, both from a mix and from scratch, so I know how easy it is, I just don't enjoy the mess I tend to make and the pile of dishes waiting for me once breakfast is eaten. But, I figured a holiday weekend called for a real homemade breakfast, so I pulled out the canister of flour, my tin of baking powder, and an incredibly ripe banana hidden away in the freezer. Add some cinnamon and nutmeg, drizzle with real maple syrup, and that's a breakfast I don't mind laboring over--pun intended :).

Note-I got a whole lotta pancakes out of this recipe--including one mishapen Darth Vader-cake--and we couldn't finish the entire stack. I wrapped the remaining five pancakes up and tossed them in the freezer; a quick nuke in the microwave and stint in the toaster, and voila, a quick weekday breakfast! 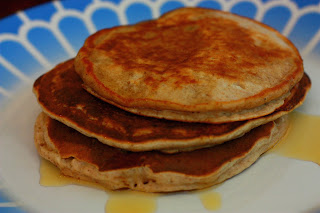 Ingredients
2 cups AP flour
1 teaspoon salt
4 teaspoons baking powder
1 Tablespoon cinnamon
1 Tablespoon nutmeg
1 overripe banana, mashed (you want the black bananas that look gross...they have the best flavor!)
1 1/2 cups milk (I used half and half, since I was out of milk)
2 eggs, beaten
1/3 cup unsweetened applesauce

Directions
Whisk together the first 5 ingredients in a large bowl. Set aside.

Combine the remaining ingredients in a second bowl. Slowly pour into the dry ingredients, stirring just until combined. The batter should be slightly lumpy.

Heat a pancake griddle or a large pan on the stovetop over medium high heat.

Spray your cooking surface lightly with non-stick spray. Ladle batter onto the griddle and cook until the edges are done and the middle of the pancake has several bubbles in the surface (about 2-3 minutes). Using a large spatula, flip the pancake and cook for another 1-2 minutes, until the pancakes is golden brown and the middle is cooked.

Serve immediately or keep warm in a 200 degree oven until the whole batch is cooked.
Posted by Janet at 8:00 AM

Email ThisBlogThis!Share to TwitterShare to FacebookShare to Pinterest
Labels: breakfast

Wow! Your pancakes look perfect! I'm sure they taste perfect as well! I will definitely have to try these out!