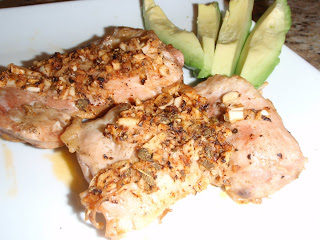 I recently made The Best of Cooking Light's Chicken Thighs with Garlic and Lime and was dissapointed with the final product. While the chicken was moist and flavorful, I felt the cumin called for in the recipe overpowered the garlic and lime flavors.

I recently decided to re-work their recipe, omitting the cumin comptely, and punching up the taste of citrus and lime. This version has a spicy kick to it, followed by the tang of garlic and lime juice, with a nice peppery after taste. MUCH better than Cooking Light's cumin-heavy recipe, if I do say so myself.

This is not too salty, but I am thinking about omitting the 1/4 teaspoon of salt next time, just to cut out some sodium. The Creole seasoning will give it more than enough salt on its own.

Mix the first 6 ingredients together in a small bowl. Add in 2 tablespoons lime juice and stir to combine. Set aside.

In a separate bowl, combine the remaining lime juice, broth, and vinegar. Set aside.

Heat a oven-proof skillet over medium high heat on the stove. Lightly mist with olive oil. Brown the chicken, top side down, for about 1 minute.

Turn the chicken over and rub with the garlic mixture. Pour the broth mixture over the chicken and bring to a boil.

Once the broth comes to a boil, place the skillet in the oven and cook for 20-30 minutes (until the internal temperature of the meat reaches 180*).

Serve chicken with juice drizzled across the top.
Posted by Janet at 4:57 PM

I love the flavors incorporated into the recipe! It's great catching up with your blog with all the delicious entries you've posted recently and hopefully I'll have more time in the future to stop by and comment!