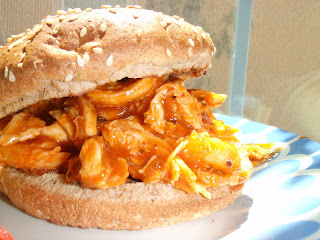 It's nearly one o'clock, you barely ate any breakfast, and now you're starting to think about lunch. What to eat, what to eat?

That was my dilemma recently. Actually that's my dilemma most days when I am not at work. Then I remembered the chicken breasts defrosting in the fridge, specifically for today's lunch. Great, I'm saved! But how to make them? I don't want to heat the BBQ. George Foreman is too boring. I already have bread baking in the oven, to I can't bake them.

BBQ chicken sandwiches! But, but, but....that'll take hours slow cooking and I want to eat nooooowwwww!

I decided to just poach the breasts, then pull the chicken apart with a fork and douse in BBQ sauce. Fast and easy pulled BBQ chicken sandwiches. No recipe needed.

Since the chicken is not slow cooked until falling apart, as in traditional pulled chicken recipes, the meat is not as melt in your mouth tender in these sandwiches. The meat is more in chunks rather than shreds. But they are, however, quite flavorful and a great alternative when you don't have hours to cook. This is incredibly easy and quick.

Ingredients
1 chicken breast per person
1 can broth (I used vegetable broth) Note: If you are cooking more than 3-4 chicken breasts, use another can of broth
1-2 teaspoons pepper
Your favorite BBQ sauce
Large hamburger buns (I used honeywheat....so good)

Directions
Pour the broth and pepper into a large pot. Bring the broth to a boil. (If the chicken is not totally defrosted, throw em in the broth while you wait for it to boil.)

Once the broth comes to a boil, add the chicken breasts and turn the heat down until the water is just simmering. Partially cover the pot and simmer for 10 minutes. After 10 minutes, turn the heat off and cook for another 10 to 15 minutes (depending on the size of the breasts).

Remove the chicken from the broth and shred, using two forks. Dump your BBQ sauce all over the chicken, tossing to ensure that all pieces are coated.

Toast the hamburger buns and pile high with the shredded, BBQ-coated chicken. Enjoy!
Posted by Janet at 1:26 PM