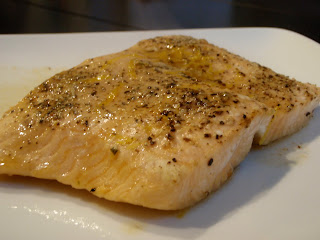 The husband and I both had Martin Luther King Jr. Day off recently, and since it was pouring down rain, couping us up at home, I had him help me meal plan. As we went through the freezer to assess what food we actually had on hand, we found a nearly full bag of individually wrapped salmon fillets from Costco. He immediately requested salmon for dinner one night and I hesitantly agreed.

I don't like salmon. I think it is too fishy and gross. I have a hard time cooking it; I never get reliable results and the last time I grilled it, my piece was mushy and incredibly fishy even when covered in salsa. The husband thinks I am crazy and loves salmon, and will eat my piece when I balk at it. So as the pre-planned salmon day rolled around, I talked the husband out of it. Being the kind person that he is, he agreed on an alternative meal.

However, some of my work cronies said I was being mean and should just cook the man some fish and make myself whatever I wanted. Fine. I'll make the fish.

Not wanting to grill in the freezing cold-ok, maybe I am being dramatic, but this is southern California, so it was cold in my opinion-I turned to my trusty copy of Martha Stewart's Every Day Food (The Light Issue) and found a recipe for salmon cooked in parchment. She called for capers and green beans, neither of which I had on hand, oil, which I forgot to use, and I added lemon, so obviously I have heavily adapted this recipe. However, the husband gobbled it up and declared it to be delicious with just the right amount of lemon.

I'll have to take his word for it; I ate pasta with arugula instead.

Directions
Pre-heat the oven to 450 degrees.

Place the salmon fillet in the center of a large piece of parchment paper. Squeeze the lemon juice over the fish, top with the zest, and sprinkle with garlic salt and pepper.

Bring the long edges of the parchment up to meet in the middle, and then fold over three times, making a seam. Fold over the edges as well, forming an envelop around the fish.

Place the parchment-wrapped salmon on a cookie sheet and bake for 8-10 minutes. The parchment will brown, and may puff up slightly.
Posted by Janet at 8:00 AM

Email ThisBlogThis!Share to TwitterShare to FacebookShare to Pinterest
Labels: fish

this looks very tasty. did you at least try it?

nope. Omar loved it though.