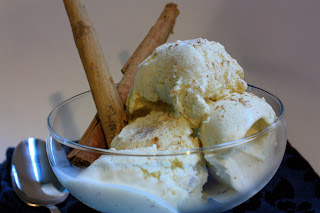 What can I say? David Lebovitz knows ice cream. His cookbook, The Perfect Scoop, is the Bible of ice cream recipes, in my opinion. Every batch of ice cream I've made from his tome has been a definite home run, and this was no exception.

As always, the ice cream was smooth, creamy, and perfectly flavorful. The recipe calls for 10 cinnamon sticks to be steeped in the milk and cream for an hour--this imparts a warm, spicy-sweet flavor that is the star of the dish. It reminded me slightly of Red Hots candy, but was also Christmasy; this would pair wondefully with a warm slice of apple pie or pumpkin pie on Thanksgiving. It's a perfect summer treat as well. In fact, I don't know when this ice cream wouldn't be a good addition to the table.

I bought my cinnamon sticks in bulk in the Hispanic aisle of the grocery store, located next to the other bulk spices.

Directions
In a medium saucepan, warm the milk, sugar, salt, cinnamon sticks and 1 cup of the heavy cream. Once warm (not boiling), cover, remove from the heat and let steep at room temperature for one hour.

Rewarm the cinnamon-infused milk. Remove the cinnamon sticks with a slotted spoon and discard them. Pour the remaining one cup heavy cream into a large bowl and set a mesh strainer on top.

In a separate medium bowl, whisk the egg yolks together. Slowly pour the warm cinnamon-milk mixture into the egg yolks, whisking constantly. (Note: I temper the eggs by pouring just a small amount of the warmed milk in first and whisking, before slowly pouring in the remaining milk mixture.) Scrape the warmed egg yolks back into the saucepan.

Constantly stir the mixture over medium heat with a spatula, scraping the bottom as you stir, until the mixture thickens and coats the spatula. Pour this custard through the strainer and into the heavy cream. Stir until cool over an ice bath.

Chill in the refrigerator overnight, then freeze in your ice cream maker according to manufacturer's directions. Scrape into a freezer safe storage container (I use Gladware) and freeze.
Posted by Janet at 7:00 AM