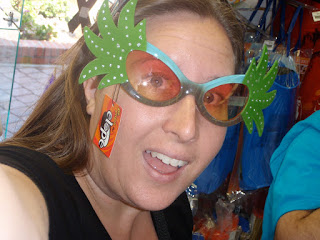 I know this is a food blog and all, but I'm serving up a post on my recent Catalina Island vacation. The husband and I spent 3 days in the tiny harbor town of Avalon, and I took a bunch of photos that I want to AW, so that's what I am going to do. Not to worry though; despite my recent absenteeism, I do plan to return to regular food blogging again. In fact, I even have a pita post all set to go next week (I've also written up a post on homemade chocolate ice cream for your enjoyment, but the husband keeps eating it all before I can get a picture)! :)

But for now, take a trip 22 miles off the Long Beach shore and suck in all the summer sun... 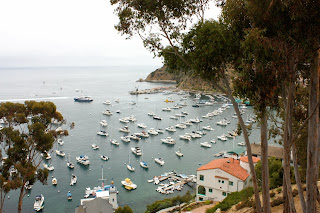 We flew from Long Beach to Avalon in a helicopter, which was very cool. But since it was hella foggy out, there wasn't much to see until we broke through the cloud cover a few miles out from the island. The view of the harbor was a-MAZ-ing! I was super lucky and got to sit up front, next to the pilot, which afforded me the best views in the chopper. The husband was relegated to a window seat in the back, next to a woman and her elderly, cancer-stricken mother. 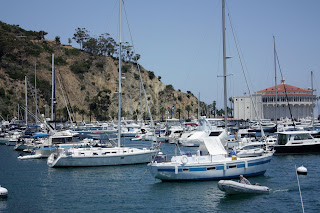 After we dropped off our bags at our incredibly pink hotel, Hotel St. Lauren, we headed out to explore. And found a restaurant serving $5 mojitos, which just happen to be our favorite beverage. Score! 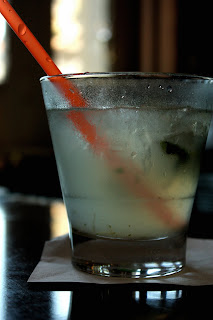 The bartender seemed a bit frazzled when we asked for a round of mojitos, which he later informed us was due to the fact that they were nearly out of mint. 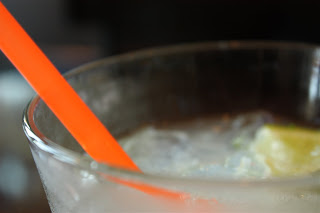 We each had about 2 and a half mojitos before he officially ran out of the key ingredient, ending the $5 special. For the next 3 days. That's island life, I guess. 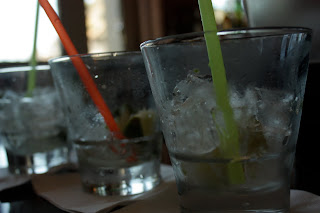 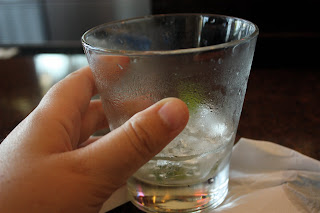 After imbibing and watching some World Cup, we decided to go on a glass bottom boat tour, something I have *always* wanted to do. I imagined an undersea world of color, filled with coral reefs, a rainbow of fish, and possibly an octopus or starfish sighting. Wrong.

If you ever find yourself in Catalina, skip the glass bottom boat tour and go do something more fun. We saw about a million perch, some striped bass, a few Garibaldi (which just look like huge goldfish) and a ton of huge kelp plants. It didn't help that the sunken seating prevented me from getting a good view of the horizon, leaving me slightly sea sick.

I didn't take any photos on the tour because fat, grey fish are boring. Go to your nearest grocery store, walk back to the seafood department, look at the whole fish laying on ice, imagine them in a state of gross obesity, and you'll see pretty much the same thing we saw. The kids on the boat were beyond excited, but I was bored and wishing we'd spent our money on something better. Also, since the boat cruised on over into Lover's Cove, which allegedly has the best snorkeling in Avalon, I knew to skip renting snorkel gear; I didn't want to pay twice to see overweight grocery store fish and huge goldfish. Fool me once...

After a semi-good dinner at El Galleon (teriyaki-glazed shrimp and steak kabobs with white rice and butter soaked veggies for me. BBQ sauce smothered, incredibly tender, ribs with burnt mashed potatos and the same veggies for The Husband. And a couple Shiner Bocks to wash it all down.) we walked over to The Casino (not a gambling venue though) and then headed over to Descanso Beach. We walked down to some steps leading into the ocean, an easy access entrance for scuba divers, and watched the rising tide. I found a few small crabs blowing spit bubbles on the rocks. One particular crab was very camera shy; every time I pulled out our little point and shoot camera, it scurried away. But I was determined to take its picture, darnit, so I just waited until it thought I didn't notice it crab-walking its way up the rock. 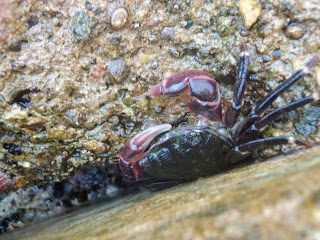 Once we were back in our hotel room, settling in for the night, a horror befell the husband and I. Dread and fear set in as I pawed through our luggage, looking for an essential item, one I can never leave home without. I had forgotten my ear plugs. You may be laughing at me right now, but let me tell you, I am not just being over dramatic here (ok, well, maybe a little...). YOU come spend a night next to the husband with nothing to protect your ears, and I'll come sleep at your house. We'll see who's still in a good mood the next morning.

By the time I realized I'd forgotten to pack my saving grace, it was too late to go pick up a new pair on the island-everything was closed. I cranked up the A/C to act as a white noise machine, jammed some tissue in my ears, and tried not to think about the imminent snoring that would soon fill the room. Sadly, my efforts were for naught, and neither the husband nor I enjoyed much sleep that night.

Thankfully, we had no hard and fast plans our second day, so I slept in late the next morning before heading out to breakfast at The Pancake Cottage (the same place we'd enjoyed our mojitos the day before). I opted for their bacon waffles, accompanied by a large bowl of sliced fruti, and a glass of water. 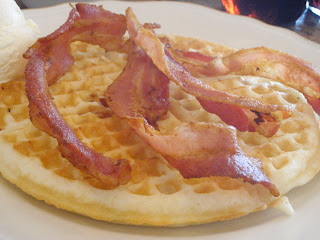 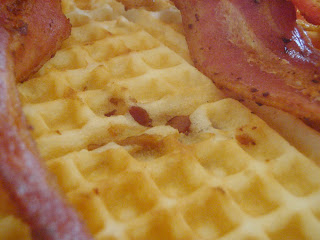 The husband went for bisquits and gravy (with the gravy on the side) and 3 buttermilk pancakes, as well as a hot cup of coffee. He was quite happy with my suggestion that he order the gravy on the side, since he hates how the bisquits are usually swimming in gravy; he prefers to just dip each bite into the gravy. While I wolfed down my food, and some of his, the husband left half of his pancakes untouched, having reached his stomach's limit. I've always been the big eater, while he is my dainty little bird. ;) 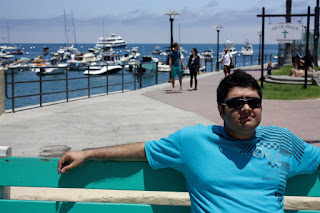 After breakfast, we rented a golf cart for 3 hours and drove around the island like a couple a bats outta hell. I'll admit, I was a bit nervous, clutching the side, as we took some windy turns up the hills, but it was a lot of fun. A lot of streets are closed to rental carts, most likely to keep the tourists from annoying the residents, but we didn't let that totally stop us. We made a few illicit turns into "no rental" territories, getting lost once, and irking some islanders at another point. The views were amazing, though much to the husband's dissapointment, we didn't see any of the island's famed buffalo. I wasn't surprised though, since we couldn't take the cart into the interior of the island. 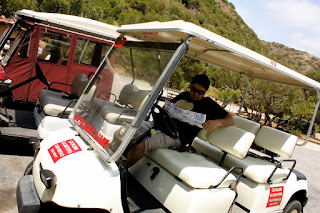 We did see this cute little buffalo though. I wanted to buy it, but it wasn't for sale and the husband didn't want to help me steal it. 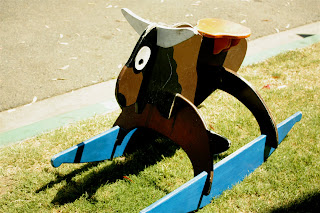 That night we ate some mediocre food on a patio overlooking the harbor, wrapped in our beach towels becasue it was so cold, before setting out to explore on foot. There wasn't much left to explore at this point, since Avalon is so tiny, but it was fun to walk around together and talk. 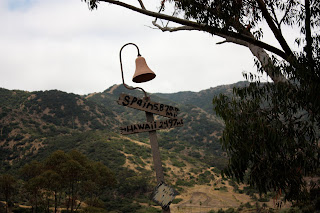 The next morning we went parasailing, something I have wanted to do for at least 15 years! Originally we were only going to go up 900 feet because I was too scared to go the full 1,400 feet, but the owner said he'd send us up to 1,400' for the 900' price, so we agreed. I can't pass up a good deal. We nervously boarded the speed boat with another young couple, who I volunteered to fly first. I am so nice. We watched them flying high above the sea for about 10 minutes or so, and then it was our turn. The husband was excited, but I was incredibly nervous. They told us not to worry about falling, that if the rope broke or the boat stalled out, we would gently float down to the water, courtesy of the giant parachute we were attached to. Once we were 1,400 feet up in the air, this was not comforting to me. 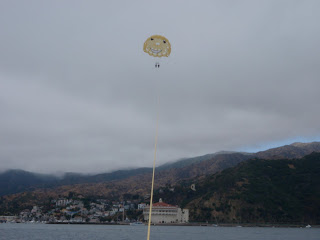 But, it was incredibly awesome, if freezing cold, and I would totally do it again if given the chance. It was actually really peaceful at the top, with the water and the little town far below us. I even released my death grip on the straps for a moment to hold the husband's hand and wave to the camera below. 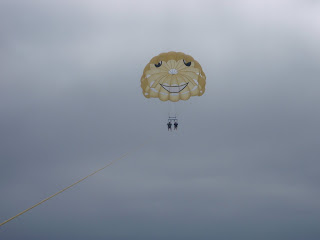 After our parasailing trip, there wasn't much left to do, though we still had about 4 hours left on the island. We walked around, taking pictures of the vacation homes, talking, and soaking up the sun. For lunch we grabbed a couple of buffalo burgers, a large order of fries to share, and some sodas on the pier. I really liked the buffalo burgers; they were small, but dense and filling. I guess this was actually our closest brush with buffalo on Avalon....too bad we were eating them, rather than watching them roam through the brush. Oh well, they were tasty and I wouldn't mind another. 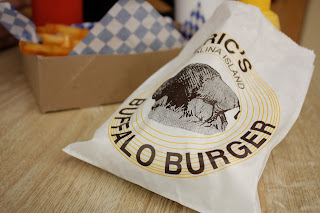 Finally it was time to get on the boat and bid Avalon adieu. We sat on benches on the back deck of the boat, watching the island fade in the distance, and breathing in the cold, salty air. As we approached Long Beach, we stood by the rail, letting the sea spray hit our faces, trying not to get knocked over by the wind and rocking of the boat. I didn't get sea sick (unlike our Mexico cruise a few years back), but now, a few days later, it still feels like I am standing on the unsteady deck of the ship.
Posted by Janet at 7:08 PM