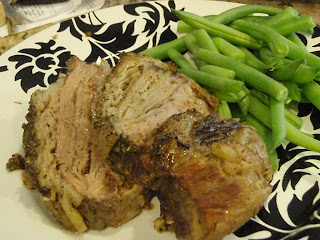 I have not had much success in cooking with my crockpot since I bought it about 2-3 years ago. Everything came out gross, mushy, too liquidy, and just not up to par. I was about ready to get rid of it when my mom advised me to try cooking a tougher cut of beef in the crockpot (I had previously only made boneless, skinless chicken breasts). My husband and I were still skeptical, but Von's had untrimmed tri tip on sale for $2.47 a pound today (they normally charge at least $8 a pound), AND I had a coupon for an additional $2 off of one tri tip. So I headed off to the store and bought two 3-pounders and hoped for the best.

I didn't use a recipe for this one. I just coated the meat in pepper, added a bit of salt, and some crushed garlic and turned on the crock pot until the meat was cooked and tender. This turned out fantastically! My husband, who has a tiny appetite, ate two servings and finished the few bites left on my plate. We served it with steamed green beans and I spooned the liquid left in the crock pot on top of the meat. We're planning on eating the leftovers, smothered in BBQ sauce, for dinner tomorrow.

This meal has converted me into a crockpot fan; it couldn't be easier. Season the meat, throw it in the pot, and turn on. Several hours later, dinner is ready.

Place the tri tip in the crockpot insert, with the fatty cap facing up. Coat the top in pepper (I used a combination of black pepper and freshly ground citrus pepper). 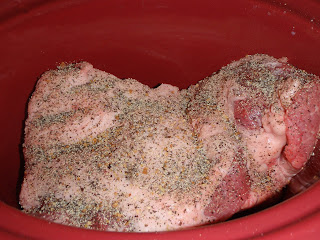 Chop up the garlic and then sprinkle with salt. Smash the garlic and salt together with the back of a spoon, making a chunky paste. Sprinkle the paste on top of the tri tip.

Slice and serve. Or slice, smother in BBQ sauce, and make sandwiches.
Posted by Janet at 2:13 PM

I'm happy you gave your crockpot a second chance. As you know, we ate many a slow-cooked meal during the times I was working crazy hours. Now you should try beef bourguignon ala Julia Childs. A classic beef stew made super-easy with your crockpot.