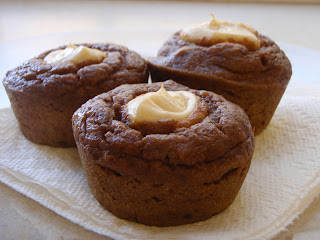 It's fall, which in the baking world, means time for pumpkin. I am not a huge Stabucks fan; I pretty much only order their black iced tea (no sweetener) or in the winter, their caramel apple cider. But I do love the pumpkin cream cheese muffins they bring out every fall. The big dollop of cream cheese in the middle is such a great contrast to the moist pumpkin. But at nearly $2 a pop, I can't afford to indulge in these treats very often, so I scoured the internet looking for a knock-off recipe. Ok, I didn't scour the internet; I pretty much just used the first recipe I found. But these muffins came out even better than the Starbucks original. They are dense, moist, spicy, and the cream cheese is perfect. I couldn't find any pumpkin seeds at my grocery store, so I omitted them, but if I had found them, I think I would have toasted them in butter and brown sugar.

These muffins taste even better a day or two after making them. The spicyness of the various spices really kicks in, giving these muffins a more pronounced tasted. That came out weird...they just taste better after a few days. I took a platter of these muffins to work and they were completely gone within an hour. I think that's a pretty good indicator of how great they really are!

The original recipe called for 1 1/4 cups of vegatable oil. I replaced the entire amount of oil with applesauce to cut down on some fat and calories. I also used neufchatel cheese instead of cream cheese; the grocery store worker told me they were interchangeable, with neufchatel cheese containing less fat than regular cream cheese. I didn't notice any difference in flavor. Also, the original recipe called for 2 cups white sugar, but I decided to use half white and half brown, just to change things up a bit. 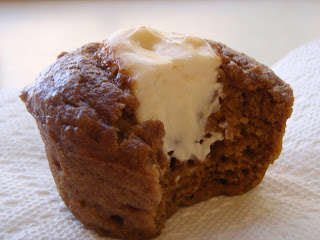 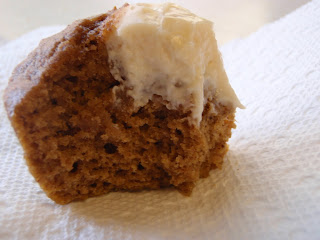 In a large mixing bowl, combine the first 7 ingredients for the muffins. Mix together until just combined.

In a seperate bowl, beat the eggs and mix in the sugars.

Add the egg and sugar mixture to the dry ingredients. Add in the pumpkin puree and applesauce, and mix until well combined.

Spoon into a sandwich bag sized ziploc. Cut off the tip of one corner. Pipe the cream cheese into the muffin batter, pushing it down into the batter slightly.

Bake for 20-25 minutes, or until a toothpick inserted into the muffin (avoid the cream cheese) comes out clean. Let cook 5-10 minutes before serving. 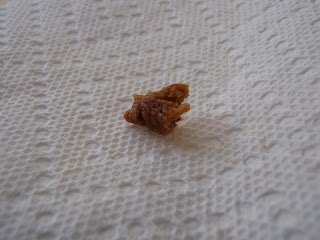 Wow! These look wonderful. You read my mind. I have a few cups of pumpkin left that I was going to use for bread but muffins will be much better. Thanks for sharing!

GK Chesterton: “The poets have been mysteriously silent on the subject of cheese.”

Voila: www.tastingtoeternity.com. This book is a poetic view of 30 of the best loved French cheeses with an additional two odes to cheese. Recipes, wine pairing, three short stories and an educational section complete the book.

From a hectic life in New York City to the peace and glories of the French countryside lead me to be the co-founder of www.fromages.com. Ten years later with the words of Pierre Androuet hammering on my brain:

“Cheese is the soul of the soil. It is the purest and most romantic link between humans and the earth.”

I took pen and paper; many reams later with the midnight oil burning Tasting to Eternity was born and self published.

I believe cheese and wine lovers should be told about this publication.