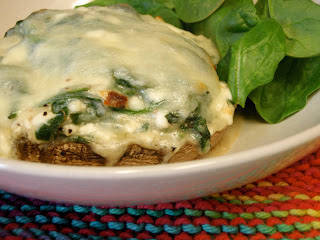 Mmm, doesn't that sound yummy? Not just one cheese, but THREE cheeses stuffed into a portabello mushroom. Now what if I told you one of those cheeses-the main cheese, even- is cottage cheese?

Don't hit the back button!

While cottage cheese may be the lumpy, bumpy mainstay of diet food, when combined with some mozzarella and parmesean, mixed with garlic-sauteed spinach and heaped into a beefy portabello cap, that lumpy excuse for a cheese comes alive. The flavor of the mushroom seeps into the cheeses, flavoring everything with a cheesy-earthy taste that is simply delicious. I know I am pushing my luck with some of you readers (people are still questioning my decision to make basil ice cream....unless they were lucky enough to get a taste. Those people are lining up for more.)

I have to admit, originally I was going to make Ricotta and Spinach-Stuffed Mushrooms, but I deviated for a few reasons:

1. I could stand to lose a few pounds (I let you decide what "a few" means), and cottage cheese is a low fat option.

2. Cottage cheese was significantly cheaper at my local Fresh & Easy, and I was trying to save money (so I could spend it on ice cream instead :/ )

3. I wanted a new recipe that I could blog, rather than a rehash of something I've already done.

Since I am housesitting for my parents, this was the perfect opportunity to try out the cottage cheese mushroom. No husband to worry about pleasing and plenty of time to make something else if this turned out badly since it only takes me 15 minutes to get to their house from work.

This was definitely a winner and will be made again. The husband will have to just deal...

Pre-heat the oven to 450 degrees. Rinse the portabellos, removing the stems and gills.

Spray a small baking dish with non-stick spray and cook the mushrooms, gill-side up, for 20 minutes.

Meanwhile, heat the oil in a large sauce pan. Sautee the garlic and spinach, just until the garlic is soft and the spinach is wilted.

In a medium bowl, combine the cooked spinach and garlic with the cottage cheese, parmesean cheese, and 1 tablespoon mozarella cheese. Add in the salt, pepper, and crushed chili peppers. Set aside.

Remove the mushroom caps from the oven. Spoon the cheese and spinach mixture into the mushrooms. It is ok to mound it slightly higher than the mushroom's edge. Sprinkle each cap with additional shredded mozarella cheese.

Return the mushrooms to the oven and bake for another 10 minutes. The cheese should be melted and slightly golden. It may run into the baking pan a bit.

Plate each mushroom and serve.
Posted by Janet at 7:00 AM

Email ThisBlogThis!Share to TwitterShare to FacebookShare to Pinterest
Labels: vegetables