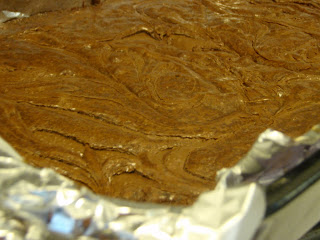 Note: sorry for the poor photo. I baked these in the evening, after the natural light was gone, and we didn't cut into them until several hours later when it was pitch black out, so I didn't even try a photo then.

I hope you caught the irony in this post after yesterday's narration. First I give you a recipe for veggie kabobs and tell you all about the new healthy lifestyle the husband and I are embarking upon, then I follow up with a post about Nutella brownies.

What can I say, I'm consistently inconsistent. (Dead Like Me reference, anyone?)

That, and who can resist Nutella? Especially when the BIG jar is on sale.

I made these brownies for some friends of ours who were visiting from Santa Barbara, just as a sweet treat and a thanks for always thinking of us when they're in town. Everyone raved about how good they were :), and I just had to agree. The best part of making these brownies? The night of drinks with friends that followed, and a dozen fresh chicken eggs from another good friend (thanks again Peggy!).

I modified a brownie recipe from Baker's chocolate, but you could use any basic brownie recipe you like, even a boxed mix, and just swirl in the Nutella. I ran out of white AP flour while making these brownies, so I used half white, half wheat and no one was any wiser.

Roughly chop the chocolate, then toss in a microwave-safe bowl with the butter. Microwave 1-2 minutes, until the butter is melted and stir to melt the chocolate. Stir until smooth; you may need to microwave for another 15-30 seconds to fully melt all the chocolate.

Stir in the sugar.

Add in the vanilla, eggs, and 1 Tablespoon Nutella and stir until combined. Mix in the flour, then pour the batter into the 9 x 13" pan.

Bake for 30-35 minutes, until a toothpick inserted into the center comes out with small fudgy crumbs. Do not overbake!
Posted by Janet at 7:00 AM