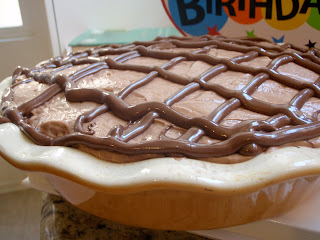 Did you read the title up there? Chocolate Overload Nutella-Mousse Brownie Pie.

This is some serious business. I have a little thing for Nutella.

That's an understatement. Nutella and I have engaged in a love affair in previous years. I had to break it off years ago, it just wasn't a healthy relationship. We first met when I was a young 20-year-old, first venturing out into the world, yet feeling a bit homesick during a stint in London. The first thick spoonful of chocolate, eaten alone in a hostel kitchen, squelched any longings for home right away. I fell hard and fast, head over heels in love.

But then I returned home, went away for the last few years of college, and broke off our love. The thought of all those chocolate-hazelnut calories glomming onto my body kept me away for years. Until I saw this recipe.

Yeah, I had to say it twice.

As soon as I saw this chocolate brownie mousse pie I knew I *needed* to make it--Immediately.

Thankfully, the husband had a birthday coming up. There was only one problem: he wanted red velvet cupcakes. Red velvet is my kitchen foe, so I usually resort to buying the Sprinkle's mix from William-Sonoma. So I did what any good wife chocolate-lover would do....I convinced him he should opt for this chocolaty-goodness instead. Happily the chocolate-on-chocolate dessert was a hit, and no mention of red velvet was made again.

I may have also licked the Nutella jar clean. But that's just between you and me. 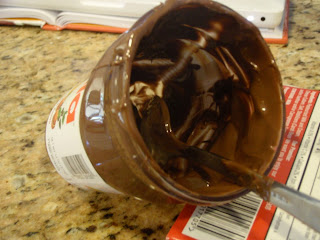 Source: Adapted from Sing for Your Supper, brownie recipe from Baker's Chocolate

In a microwave-safe bowl, heat the chocolate and butter in the microwave (I did 45 second increments) until the butter is melted. Stir to melt the chocolate.

Stir the sugar into the chocolate, ensuring it is well combined. Add the vanilla and eggs and stir until completely combined. Add in the flour, stirring until well blended.

Pour the brownie mixture into the pie pan and bake for 35-45 minutes, or until a toothpick inserted in the center comes out clean (mine actually took about 55 minutes).

Remove from the oven and allow to cool, in the pie pan, on a wire rack.

Once the brownies are completely cooled whip the cream, vanilla and sugar in a mixing bowl, using the whisk attachment, until stiff peaks form. Spoon into another bowl and set aside.

In the same mixing bowl (no need to wash), mix the cream cheese and Nutella, with the paddle attachment, until well combined.

Using a large spatula, spread the mousse over the cooled brownies. Spoon the remaining Nutella into a small ziplock bag. Snip off the corner and pipe over the mousse. Refrigerate until ready to serve.

The birthday husband wearing his new Niners jersey and posing with his bday decorations. :) 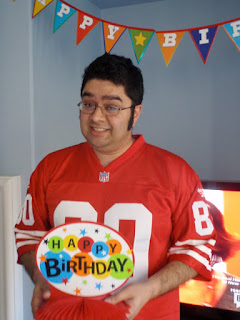 I think you're trying to kill us.