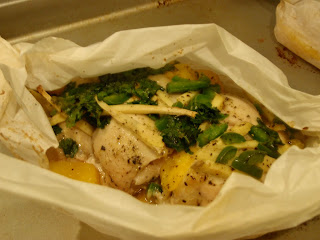 I've been cooking my way through Martha Stewart's Everyday Food-The Light Issue lately, and have really enjoyed the recipes I've tried. I was particularly intrigued by her tip on cooking in parchment, and fueled by the success with salmon cooked in parchment, I decided to give this recipe a try.

While the final results were delicious--slightly sweet, almost tropical--the recipe had one major annoyance for me. It calls for the chicken to be cooked at 400 degrees for 18-20 minutes. Well, after 20 minutes my chicken was still raw! Now, I did use boneless chicken thighs, instead of the chicken cutlets Martha calls for (I don't even know what a cutlet is!), but thighs are small, and without bones, don't usually take long to cook. I kept checking the chicken for doneness every few minutes, until it was finally cooked all the way through after 35 minutes.

Either my oven temp is off (always a possibility) or Martha just got the cooking time wrong here. Despite that annoyance, I still enjoyed this recipe and highly recommend it. The mango flavor is absorbed into the chicken and the parchment makes for easy clean up. Don't be scared by the jalapeno...it added depth of flavor without being spicy. It also helps that I removed the seeds and white membrane, where most of the jalapeno's heat resides.

Directions
Pre-heat the oven to 400 degrees.

Peel the mango and slice into bite-sized chunks. Divide the mango chunks in half, and place them in the center of 2 large sheets of parchment paper.

Top the mangoes with chicken, ginger, jalapenos, and cilantro. Drizzle 1/2 a teaspoon oil over each packet. Sprinkle with salt and pepper.

Bring the edges of the parchment up to meet in the middle, and then fold them over, creating a seam. Twist the open edges, sealing the packets shut. Place each packet on a cookie sheet
and bake for 18-20 minutes (mine actually took 35 minutes to cook). 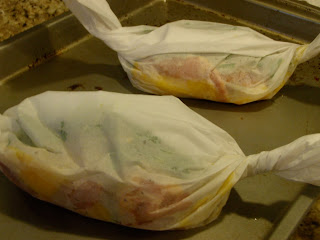 Plate the chicken, including the cooked mango, and serve with lime wedges. 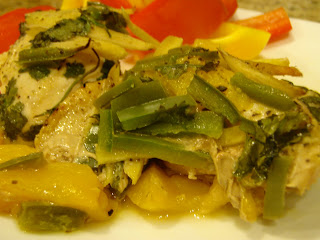 Cutlets are a fairly thin slice of the breast and will always cook pretty quickly. The thighs on the other hand are dark meat and more dense, thus the longer cooking time, even when boneless. Try it again using a boneless breast, pounded to be thinner. This is a lower cost alternative to a cutlet.

thanks for the info. I will try pounding breasts out thin next time and seeing how that works. The recipe is really good even though it took forever to cook!