Growing up I was a fairly picky eater, with a long list of veggies I did.not.like.at.all. Asparagus was definitely on that list. I absolutely *hated* asparagus! My mom steamed it and served it plain; just limp, ugly green spears that tasted bitter (sorry Mom!). I vowed never to eat asparagus once I grew up and I knew that I would never force my children to suffer the same fate as I. Of course, life can be funny and according to my mom, I wasn’t really picky, I just wanted to be in control…

It wasn’t until I was at a wedding as an adult that I willingly tried asparagus on my own. Oh my goodness! These spears were soooo good! They had been oven roasted with rosemary, and probably some olive oil. I actually wanted seconds of this once taboo veggie!

Now, I make asparagus quite often (I buy huge bags of it at Costco), and I usually either grill it on the barbecue or I just throw it in the oven with some salt and pepper. It’s one of the few veggies my husband will eat, and often requests.

I decided to try dressing it up a bit recently, and since I was making herb de provence chicken, I decided to throw some of the same herbs on my asparagus.

The result: Let’s just say, that once I finally do have kids, they will never view asparagus as something to detest. ☺

Asparagus de Provence
*Note: There are no measurements in this recipe. While I usually find that annoying when I am recipe-hunting, I find it works best for this one to just use the amount that you like. :)


Heat your oven to 375 degrees. (Perfect if you are also making chicken herbs de provence.)

Trim the ends from your asparagus and rinse them off. Pat dry with a paper towel and lay them in a 9 x 13" pan. Drizzle the olive oil over the spears. Don't douse them though! I like to shake the pan once I've drizzled the oil, so the oil spreads on all the spears.

Here they are raw, all dressed up and ready to go in the oven. 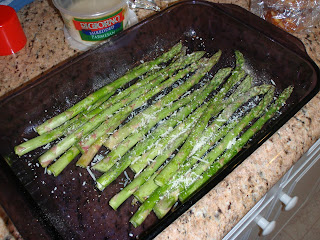 Throw in the oven and cook. I put mine in for about 15 min, so they are still crisp, but not raw.
Serve with your favorite entree and enjoy! 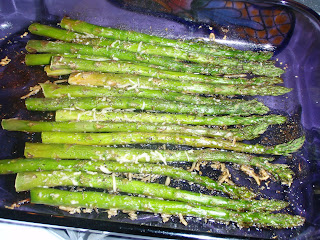 Email ThisBlogThis!Share to TwitterShare to FacebookShare to Pinterest
Labels: vegetables

I love how simply made this is! Great job!

Thanks! It really is easy and so much better than just steaming.