Turkey of a Sandwich

I set out to make Rachel Ray's Spicy Meatball Sandwiches (from her "No-Recipe Zone" recipes) for dinner a few nights ago. I love sandwiches and was very excited at the thought of a warm, saucy, slightly spicy meatball subs.
Well, just as the poster in my 5th grade classroom said "If all else fails, read the directions.", I failed and then read the directions. The recipe calls for ground meat, so I defrosted my ground turkey, threw it in the skillet to brown and added a bunch of spices. THEN I decided I should check the recipe to see what was next. Except browning the meat wasn't first....or ANYWHERE? UGH, I was suppossed to mix the raw meat with the seasonings and form them into meatballs, then add them to the sauce to simmer. Never did it say to brown anything.
Rather than waste a perfectly good package of ground turkey, plus a bunch of seasonings, I just continued with the recipe and threw the browned turkey into the sauce. I wound up having to add another can of tomatos (probably should have added two additional cans) to get a sauce effect with so much surface area of meat to cover. So my meatball subs turned into a flop, which I righted into something new. 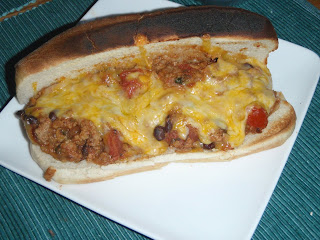 Turkey Un-Meatball Sandwiches
(There are a several adaptations from the RR recipe. Enough that this isn't even really the same thing anymore... Also, I am giving you the recipe with my mistake of not making meatballs. Eventually I plan to try again and will post the real thing.)

Brown the turkey in a skillet with the chili powder and cayanne. While the turkey browns, heat the olive oil in a heavy bottom pan (I used my Martha Stewart enamaled cast iron pot). Add the sliced onions and cook until they are translucent and soft. Then, add in all of the cans of diced or chopped tomatos, the oregano and the red bell pepper.

Once the turkey is browned, drain any fat and mix in the smashed Fritos. Add the turkey and Frito mix to the tomatos and let simmer for about 10 minutes. Dump in the can of black beans (do not drain them....you want to add the bean juice as well) and stir. If you want these to be really saucy sandwiches, add in another can or two of tomatos. I would have, except I didn't have anymore.

Stir until heated through. Turn the heat down to low.

Turn on your broiler. Toast the sandwich rolls under the broiler until they are slightly browned...I put mine in on high and left them in slightly too long. It would probably be best to out them in on Low and then check after a minute.

Spoon the meat mixture into the sandwiches and sprinkle with the grated cheese. These are messy, but so good (even if they are not meatball subs)!!

This looks wonderful and so hearty!!